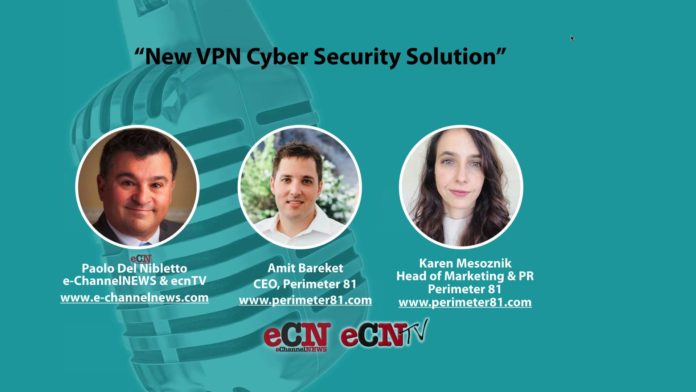 Bareket, the co-founder and CEO of Perimeter 81, said Public WIFI maybe convenient but it’s not secure and can be quite dangerous.

“When using Public WIFI anyone can intercept your information on the network, decrypt it and extract all your personal information,” he said.

But hackers will not stop at just stealing data. Bareket added that they can also change your image and start recording your communications too.

For more on the dangers of Public WIFI click here to listen to the PodCast featuring Amit Bareket of Perimeter 81.

Bareket, who is the author of seven patents and worked as an IBM software engineer on breakthrough products such as XIV Storage and BigBand Networks, said virtual private networks or VPNs can ensure the safety of the data and the user’s personal information. He started Perimeter 81 as a disruptive VPN cloud-based solution that deploys similar to DropBox.

The company is targeting managed services providers (MSP) offering them a solution with no hardware to integrate into their environment. The Perimeter 81 platform works anywhere and is always-on providing users with access to corporate Intranets and data while working remotely or at home. Perimeter 81 is a Software-as-a-Service with around-the-clock VPN protection especially when users connect to an unsecured Public WIFI network.

“Perimeter 81 activates a VPN connection automatically anytime your phone or computer connects to the Public WIFI. The VPN creates an encrypted tunnel making all data secured while you are on the Public WIFI,” Bareket said.

By providing the solution in a SaaS model, Bareket said it will give MSPs and customers a competitive advantage with zero touch and it eliminates the complex set up and long sales process.

“Our flexible software structure pushes out updates and improvements every single day giving users the advanced features they need,” he said.

Workforce collaboration is also on the increase and the convenience of Public WIFI is a big factor for the rise. In today’s workforce 62 per cent of people are working from more than one location, while a whopping 81 per cent of people do work functions during personal time.

And, 65 per cent of workers collaborate with multiple people more than once a day making VPNs more of a private gateway for teams.

Bareket sees this as well. He said that Perimeter 81 already has a good number of “power users” or teams that are spread throughout many locations and countries. “They are relying on our service to secure their inquiries and access to other SaaS services and IaaS like AWS or crowd environments. And, there is also internal-based resources that are on-premises. There is a patent pendent new feature on Perimeter 81 that provides automatic WIFI security that’s on the go. The second someone’s device connects to an unsecured WIFI it automatically activates an encrypted connection to safeguard the user’s activities,” he said.