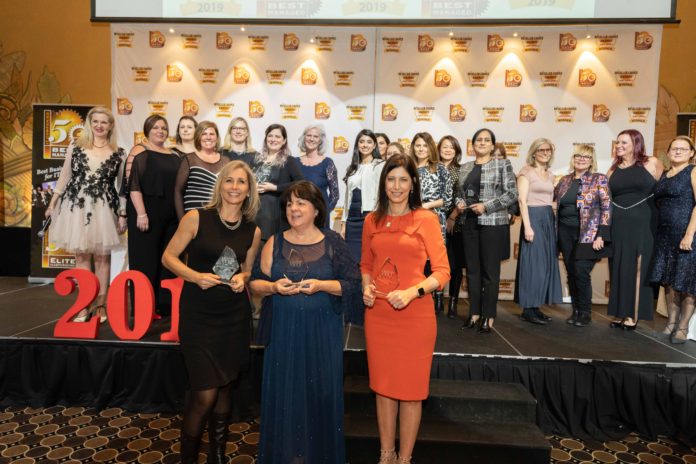 Benitah, Deacon and Wilson have spent a collective 80 years in the Canadian IT industry and were celebrated on stage by all the other women in attendance at the Reseller Choice Awards.

While the Canadian IT industry still remains a male-dominated sector with a little more than 20 per cent women IT workers in the space, the WIT program strives to support and encourage women to stay in IT, while promoting high tech as a top career choice to young professionals in Canada.

Other notable moments from the event was Tech Data Canada’s 12-year reign as the Best Broad-based Distributor come to an end with Synnex Canada taking top spot.

While Microsoft Canada took home the most awards including the highly coveted Best Cloud Platform As-A-Service award, it was Datto who swept the Best Overall Vendor prize along with the Best Channel Program award.

The 13th annual Reseller Choice Awards delivered another packed house at the Eglinton Grand theatre in Toronto. Canadian channel executives vote on the top performers in 70 categories such as client computing, printing, security, cloud, networking, backup, as-a-service solutions, storage, CRM, customer service, data centre, help desk, gaming, Internet of Things, mobility and more. Channel partners throughout Canada nominate and vote in an interactive survey that reflects the current status of the market, while incorporating trends in the industry and the channel ecosystem.

Britain’s 50 Best Managed IT Companies Winners for 2021 are…

This website uses cookies to improve your experience while you navigate through the website. Out of these, the cookies that are categorized as necessary are stored on your browser as they are essential for the working of basic functionalities of the website. We also use third-party cookies that help us analyze and understand how you use this website. These cookies will be stored in your browser only with your consent. You also have the option to opt-out of these cookies. But opting out of some of these cookies may affect your browsing experience.
Necessary Always Enabled
Necessary cookies are absolutely essential for the website to function properly. This category only includes cookies that ensures basic functionalities and security features of the website. These cookies do not store any personal information.
Non-necessary
Any cookies that may not be particularly necessary for the website to function and is used specifically to collect user personal data via analytics, ads, other embedded contents are termed as non-necessary cookies. It is mandatory to procure user consent prior to running these cookies on your website.
SAVE & ACCEPT
MORE STORIES
Awards

Greenford’s The Technologies Group (formerly SCA) named one of Britain’s 50...