There are no 5G networks today. But, they are coming, said John Roese, the CTO of Dell EMC, Infrastructure Solutions Group.

Roese said that hundreds of billions of dollars have already been spent on infrastructure to make 5G happen and its a similar type of market disruption that occurred years ago with the transition from 3G to 4G. The latest GSMA Intelligence report found that U.S. service providers/carriers plan to spend approximately $100 billion by 2020 on 5G networks.

In a nutshell, 5G is a new cellular network system that is faster and provides lower latency by using technology such as orthogonal frequency-division multiplexing (OFDM).

Roese said, in a special briefing for press and analysts at the Dell Technologies World conference, the company is building a distributed cloud with software-defined solutions that will include technology from Virtustream and VMware for the 5G market opportunity.

One of those investments came late last year with the VMware acquisition of VeloCloud. VeloCloud is a start-up that centres its offering on cloud-based wide area networking for data centre regions.

Honore Labourdette, Vice President of Global Market Development, Telco Group for VMware, in the same briefing, sited VMware CEO Pat Gelsinger statement from last year where he said there will be two kinds of 5G networks; ones that are virtualized and ones that have failed.

Labourdette went on to say virtualization is the key to 5G networks that will open up greenfield opportunities such as SD-WAN that will have a software-defined infrastructure.

For the channel and managed services providers (MSP), additional services for 5G can be provided by the channel community to customers. Tom Burns, the senior vice president of Dell EMC Networking and Solutions, told EChannelNews, that he sees new services being built by channel partners and the company has developed a program around that. These services will not be exclusive to large enterprises and will include the SMB. 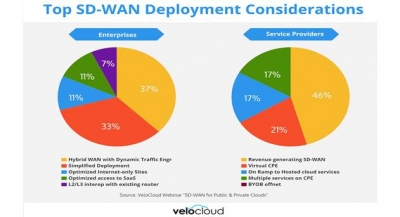 “VeloCloud is one example of how the channel can bring down branch connectivity to SD-WAN and extend that with NSX to a virtual firewall. They can deliver this as an office in a box with WIFI and connectivity that lowers the cost of a small branch. MSPs can get a monthly subscription for their services based on user access,” Burns said.

One new service that cannot be done in 4G is the connected car. Roese told EChannelNews that these automobiles have many sensors collecting and propagating data at levels such as 100s of megabits per data. “This is not possible in 4G,” he said.

Since the connected car captures data, the challenges come in getting that data off the car. The transfer is too big and will limit the range of the car, Roese said. The opportunity is to bring caching and processing layer close to the 5G network to get the data stored and the compute capacity correct. One service Roese has seen is the deploying of code to reduce that data set and bring it back to the cloud.

“This data is critical for optimizing the routing, mapping and traffic management from the car. It’s too much data and it would overwhelm the data centre core,” he added.

According to Roese, the car manufacturers have no plans to develop these types of services on their own producing a new business opportunity for the channel. The car companies would rather rent capacity and compute on 5G networks to get access to this data.

Interview with Accedian at ChannelNext East 2022

This website uses cookies to improve your experience while you navigate through the website. Out of these, the cookies that are categorized as necessary are stored on your browser as they are essential for the working of basic functionalities of the website. We also use third-party cookies that help us analyze and understand how you use this website. These cookies will be stored in your browser only with your consent. You also have the option to opt-out of these cookies. But opting out of some of these cookies may affect your browsing experience.
Necessary Always Enabled
Necessary cookies are absolutely essential for the website to function properly. This category only includes cookies that ensures basic functionalities and security features of the website. These cookies do not store any personal information.
Non-necessary
Any cookies that may not be particularly necessary for the website to function and is used specifically to collect user personal data via analytics, ads, other embedded contents are termed as non-necessary cookies. It is mandatory to procure user consent prior to running these cookies on your website.
SAVE & ACCEPT
MORE STORIES
Networking/SD-WAN

Martello Technologies Receives a 2018 Internet Telephony SD-WAN Product of the...