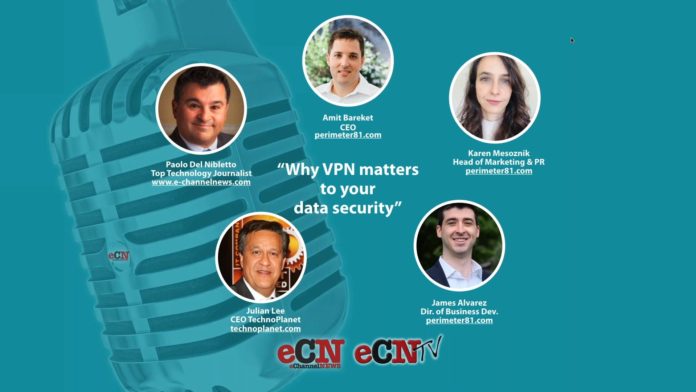 Virtual Private Network technology is certainly not new. VPNs have been around for more than two decades. But in this roundtable discussion EChannelNews takes an in-depth look at the VPN marketplace, which is expected to reach the US$70 billion market by next year.

Perimeter 81 is a new entry in the Canadian and U.S. market with a disruptive VPN cloud-based technology that makes deployment as easy as DropBox.

Topics for this roundtable include the security risk around Public WIFI networks, hacks such as Man-in-the-Middle and how to avoid them, workforce and workplace collaboration needs, how VPNs need to step up with security, VPN in a SaaS model, the channel opportunity with Perimeter 81 and the MSP benefits from the Perimeter 81 solution.

Interview with Linode at ChannelCON 22

Interview with MSP Toolshed at ChannelCON 22

This website uses cookies to improve your experience while you navigate through the website. Out of these, the cookies that are categorized as necessary are stored on your browser as they are essential for the working of basic functionalities of the website. We also use third-party cookies that help us analyze and understand how you use this website. These cookies will be stored in your browser only with your consent. You also have the option to opt-out of these cookies. But opting out of some of these cookies may affect your browsing experience.
Necessary Always Enabled
Necessary cookies are absolutely essential for the website to function properly. This category only includes cookies that ensures basic functionalities and security features of the website. These cookies do not store any personal information.
Non-necessary
Any cookies that may not be particularly necessary for the website to function and is used specifically to collect user personal data via analytics, ads, other embedded contents are termed as non-necessary cookies. It is mandatory to procure user consent prior to running these cookies on your website.
SAVE & ACCEPT
MORE STORIES
Managed Services

How MSPs can increase their value to SMBs

Growing your MSP with compliance