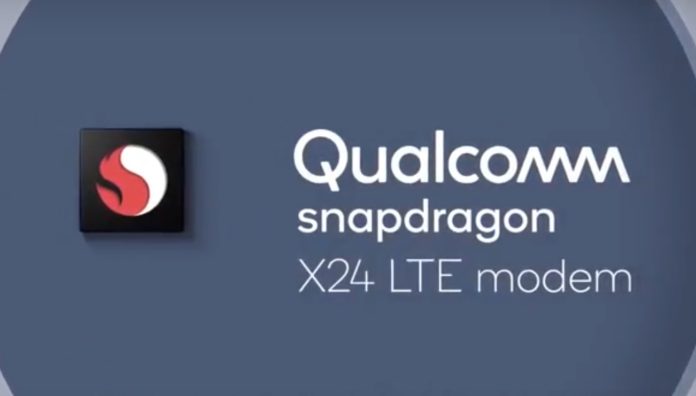 Qualcomm Incorporated announced that its subsidiary, Qualcomm Technologies, Inc., has started sampling the Qualcomm Snapdragon X24 LTE modem, the world’s first announced Category 20 LTE modem supporting up to 2 gigabits per second (Gbps) download speeds, and the first-announced chip built on a leading-edge 7 nanometer FinFET process. It is the Company’s eighth generation LTE multimode modem and third generation Gigabit LTE solution, featuring the most advanced cellular features of any commercially available 4G LTE modem to date, and strengthening the LTE foundation for future 5G NR multimode devices and networks. The Snapdragon X24 LTE modem will be featured in a live demonstration at Mobile World Congress Barcelona in conjunction with Ericsson, Telstra and NETGEAR.

“As the world’s first announced Gigabit LTE modem to achieve speeds of up to 2 Gbps, the Snapdragon X24 LTE modem sets a major mobile industry milestone, designed to provide enhanced mobile broadband and deliver an extremely important gigabit coverage layer for commercial 5G networks and mobile devices that are expected to start launching in 2019,” said Serge Willenegger, senior vice president and general manager, 4G/5G and Industrial IOT, Qualcomm Wireless GmbH. “Further expanding on the use of 4×4 and LAA capability, the Snapdragon X24 packs a powerful array of the most advanced 4G LTE technologies commercially available, helping mobile operators to fully mobilize their spectrum assets and maximize the capacity of their Gigabit LTE networks, and mobile device makers to offer consumers a tangible glimpse of our 5G future”.

As the world’s first commercially announced Category 20 LTE modem supporting download speeds up to 2 Gbps, the Snapdragon X24 LTE modem delivers 2x the speed of the Company’s first generation Gigabit LTE modem. The Snapdragon X24 supports up to 7x carrier aggregation in the downlink, as well as 4×4 MIMO on up to five aggregated LTE carriers – both mobile industry firsts – for a total of up to 20 concurrent spatial LTE streams. This unprecedented feature set is designed to allow devices that feature the Snapdragon X24 LTE modem to utilize all spectrum assets available from a mobile operator, whether in licensed spectrum, or with License Assisted Access (LAA). Additional system capacity improvements are made possible through support of Full Dimension Multi-Input Multi-Output (FD-MIMO), a Massive MIMO technology that is foundational to future 5G NR networks. In the uplink, Snapdragon X24 supports Category 20 upload speeds, 3×20 MHz CA and up to 256-QAM.

Samsung announced the Galaxy A23 5G

This website uses cookies to improve your experience while you navigate through the website. Out of these, the cookies that are categorized as necessary are stored on your browser as they are essential for the working of basic functionalities of the website. We also use third-party cookies that help us analyze and understand how you use this website. These cookies will be stored in your browser only with your consent. You also have the option to opt-out of these cookies. But opting out of some of these cookies may affect your browsing experience.
Necessary Always Enabled
Necessary cookies are absolutely essential for the website to function properly. This category only includes cookies that ensures basic functionalities and security features of the website. These cookies do not store any personal information.
Non-necessary
Any cookies that may not be particularly necessary for the website to function and is used specifically to collect user personal data via analytics, ads, other embedded contents are termed as non-necessary cookies. It is mandatory to procure user consent prior to running these cookies on your website.
SAVE & ACCEPT
MORE STORIES
Hardware