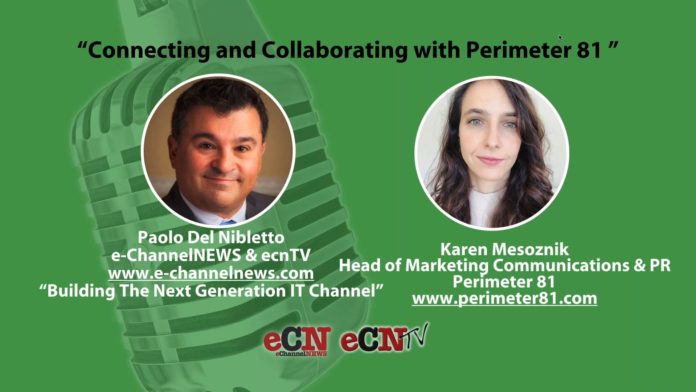 EChannelNews has been featuring a series of articles and podcasts in the last month on Israel-based security vendor Perimeter 81.

The company has recently laid down roots in the U.S. and Canada because Perimeter 81 founders Amit Bareket and Sagi Gidali saw a huge demand in the small-to-medium size business and the small-to-medium enterprise markets for a simpler, more secure way to provide remote access to workers.

Karen Mesoznik, the director of marketing and communications for Perimeter 81, told EChannelNews in a podcast that there are so many organizations who have employees based around the world and have not yet given them secure access to work with company apps and data in any location.

“Israel is a small market, but we saw great success with our consumer product SaferVPN and we decided there should be a simpler, safer solution for the business world. And, Perimeter 81 wants to redefine secure remote access with a product that works quickly and has features that are automatic,” she said.

This was the inspiration for Bareket and Gidali; who met in university in Tel Aviv after working in the Israel Defense Force. The name “Perimeter 81” comes from Bareket’s Unit (81) in the Israel Defense Force. The two security experts also became finalists at Microsoft’s Imagine Cup competition and it was there where Bareket and Gidali decided to team up.

“Both saw how complicated, tedious and unsecure remote access technology was and thought if they combined their talents they could change and transform the world,” Mesoznik said.

She added that the unique backgrounds of the founders give Perimeter 81 an edge in the marketplace. “Every company needs the ability to provide employees secure remote access. People are working all over the world, working on their mobile phones and always on the go. So, this is very essential.”

Also on the podcast, Mesoznik talked about the dangers of public WIFI, Perimeter 81’s go-to-market strategy in the SMB, why the Software-as-a-Service model fits in well with today’s market and how the company plans to grow its channel partner network.

Re-read the Perimeter 81 series by clicking on these headline links.

Preventing the security gap in the cloud

For more Podcasts on Perimeter 81, click on these links.

The perils of Public WIFI

Wildix Skips Christmas Dinners to Help UkraineInstead of being spent on food, the €50,000 raised helps those in the path of war

Wildix Skips Christmas Dinners to Help UkraineInstead of being spent on...