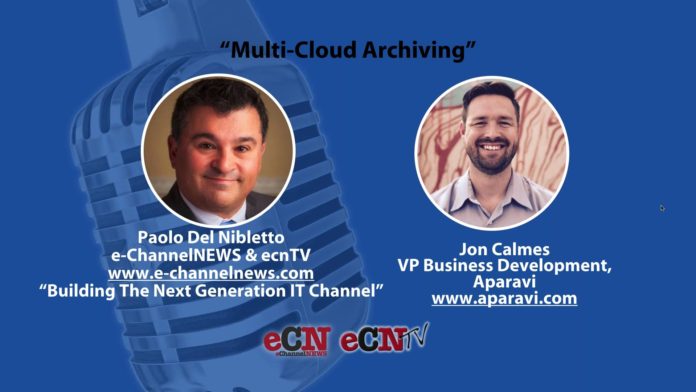 Approximately 85 per cent of organizations in Canada and the U.S. have a multi-cloud strategy. This is the basis of Silicon Beach, Calif.-based Aparavi, a cloud data retention software vendor with a Software-as-a-Service (SaaS) model for the channel.

Jonathan Calmes, the vice president of business development for Aparavi, told EChannelNews in a podcast that his company is fairly new, but should not be described as a “start-up.”

Aparavi released a SaaS-based multi-cloud product called Active Archive that Calmes said focuses on unstructured data. He admits that the backup market is crowded, but not too many tools such as Active Archive are software based and require no hardware appliance. “It’s a key differentiator for us,” he added.

“When I worked at a backup vendor I was told that backups are broken and there are too many regulations. The cloud was at a point where there were many conversations happening about a need to get data to the cloud, while also having some flexibility. Organizations were forced to get into multi-cloud because of all the massive amounts of unstructured data growth. We built Aparavi from the ground up to be multi-cloud,” he said.

The business opportunity for channel partners with Aparavi is to target organizations with compliance challenges and a need for any-cloud data retention. Active Archive has a RESTful (representational state transfer technology) API and open data formats with a multi-tenant architecture.

The channel can support Google, AWS or any on-premise private cloud, where the Aparavi solution can move data between clouds. For example, an organization can start with AWS S3 and then find a new, cheaper alternative. Aparavi can stop the growth in the first cloud, while still being fully recoverable and accessible and at the same time move the data to the new location.

Calmes in the podcast also talked about Aparavi’s channel strategy along with security threats such as ransomware.

e-ChannelNews is a daily electronic news magazine for the IT channel that delivers important industry insider’s information that helps the channel to grow business and overcome business challenges. It is also the delivery vehicle for channel-only vendor news and promotions.
© copyright © TechnoPlanet Productions Inc. All rights reserved.
MORE STORIES
Cloud/SaaS

Martello Places No. 206 on The Globe and Mail’s brand-new ranking...