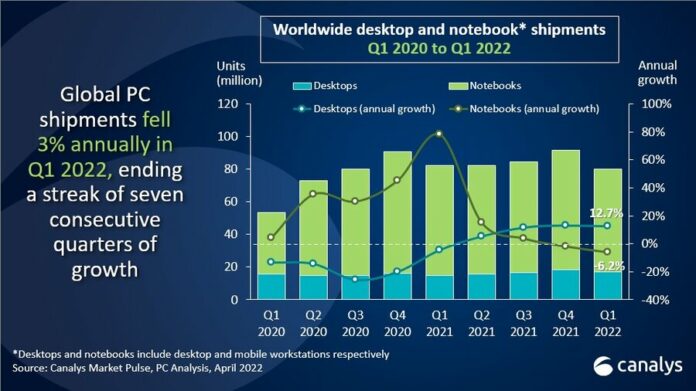 “Vendors and their shareholders have reason to cheer, as the PC industry’s revenue growth streak continued,” said Canalys Principal Analyst Rushabh Doshi. “People are using their PCs more often, for longer and for a greater range of tasks than ever before. The last two years have greatly expanded the installed base, with over 150 million notebooks and desktops added between 2019 and 2021. Even if customers are forced to delay purchases due to rising prices in the short term, a large wave of device refresh is inevitable, especially given that more than 50% of active devices are more than four years old. Meanwhile, commercial demand will remain strong this year even as consumer and education purchasing falters. The resumption of workplace activity at close to pre-pandemic levels coupled with hybrid and remote workers needing higher-specified PCs to maximize productivity means business IT expenditure will remain elevated in 2022.”

Lenovo remained the top vendor in the PC market in Q1 2022 with shipments of 18.2 million units, for an annual decline of 10%. HP held on to second place but suffered the largest decline of the top five vendors, its shipments falling 18% year on year to 15.8 million units. Third-placed Dell posted healthy growth of 6%, with its shipments reaching 13.7 million units on the back of its strong commercial focus. Apple and Asus also enjoyed growth, increasing shipments by 8% and 24% and taking the fourth and fifth positions respectively. This marks the first quarter in which Asus has secured a spot in the top five vendor rankings since Q3 2017.

“The first quarter of 2022 brought a fresh wave of headwinds to the PC market,” said Ishan Dutt, Senior Analyst at Canalys. “Seismic global events have had a negative impact on both the demand and supply side, hitting the industry at a time when consumer and education purchases have both naturally slowed after the highs of last year. The war in Ukraine has exacerbated the inflationary environment in major markets by driving up the price of commodities, ranging from oil and gas to metals to foodstuffs. In parallel, COVID-related lockdowns in key Chinese cities such as Shenzhen and Shanghai have created new bottlenecks in manufacturing and distribution, just as vendors and the channel were beginning to find their feet. With no clear timeline on when these issues will be resolved, and the possibility of other black swan events, the industry must be prepared to tackle a new set of challenges and respond with the same resilience it has showed over the last two years.”

Interview with PCs for People at ChannelCON 22

This website uses cookies to improve your experience while you navigate through the website. Out of these, the cookies that are categorized as necessary are stored on your browser as they are essential for the working of basic functionalities of the website. We also use third-party cookies that help us analyze and understand how you use this website. These cookies will be stored in your browser only with your consent. You also have the option to opt-out of these cookies. But opting out of some of these cookies may affect your browsing experience.
Necessary Always Enabled
Necessary cookies are absolutely essential for the website to function properly. This category only includes cookies that ensures basic functionalities and security features of the website. These cookies do not store any personal information.
Non-necessary
Any cookies that may not be particularly necessary for the website to function and is used specifically to collect user personal data via analytics, ads, other embedded contents are termed as non-necessary cookies. It is mandatory to procure user consent prior to running these cookies on your website.
SAVE & ACCEPT
MORE STORIES
Hardware