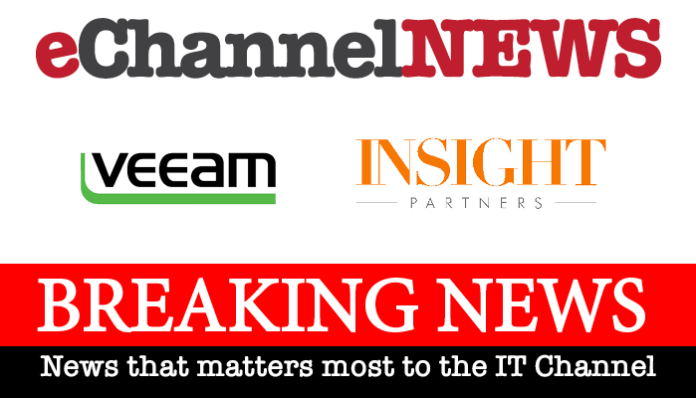 Software investor Insight Partners announced that it will acquire Veeam Software, a leader in Backup solutions that deliver Cloud Data Management. Under the ownership of Insight Partners, Veeam will become a U.S. company, with a U.S.-based leadership team, while continuing its global expansion from offices in 30 countries and with customers in over 160 countries. The acquisition is expected to close during the first quarter of 2020.

“Veeam has enjoyed rapid global growth over the last decade and we see tremendous opportunity for future growth, particularly in the U.S. market. With the acquisition, we are excited that our current U.S. workforce of more than 1,200 will be expanded and strengthened to acquire and support more customers,” said William H. Largent, CEO at Veeam. “Veeam has one of the highest caliber global workforces of any technology company, and we believe this acquisition will allow us to scale our team and technology at an unrivalled pace.”

Following an investment from Insight Partners at the beginning of 2019, Veeam has reached over $1 billion in annual sales and more than 365,000 customers worldwide. The company launched a number of new innovations over the last year, including Veeam Backup for Amazon Web Services (AWS), Veeam Backup for Microsoft Office 365 v4, Veeam Universal License (VUL) and announcing Veeam Backup for Microsoft Azure – growing its share of the U.S. market, as well as cementing its position in the global market. The acquisition and bolstering of U.S. leadership will accelerate Veeam’s already impressive growth trajectory and expansion into adjacent markets.

“In a world where a business’s most valuable asset, its data, is constantly on the move and being created at unprecedented rates, data management has never been more critical, and more complex. Legacy solutions cannot keep up. Veeam’s software provides holistic coverage for the modern business,” Veeam’s Danny Allan said. “While Veeam’s preeminence in the data management space, currently supporting 81% of the Fortune 500, is undeniable, this commitment from Insight Partners and deeper access to its unmatched business strategy and ScaleUp division, Insight Onsite, will bring Veeam’s solutions to more businesses across the globe.”

The Board of Directors will be immediately supplemented with seasoned software, government and business leadership as co-investor Nick Ayers, of Ayers Neugebauer & Company, a member of the World Economic Forum’s Young Global Leaders and former Chief of Staff to the Vice President of the United States, joins Insight Partners Managing Director Mike Triplett and Veeam CEO, William H. Largent on the Board. Following the acquisition, Co-Founders Andrei Baronov and Ratmir Timashev will step down from the Board. Additionally, Insight Partners Managing Directors Ryan Hinkle and Ross Devor will each serve on the Board once the acquisition has been completed.

Live Webinar: Is your Backup & DR Compliant with Canada’s Privacy...