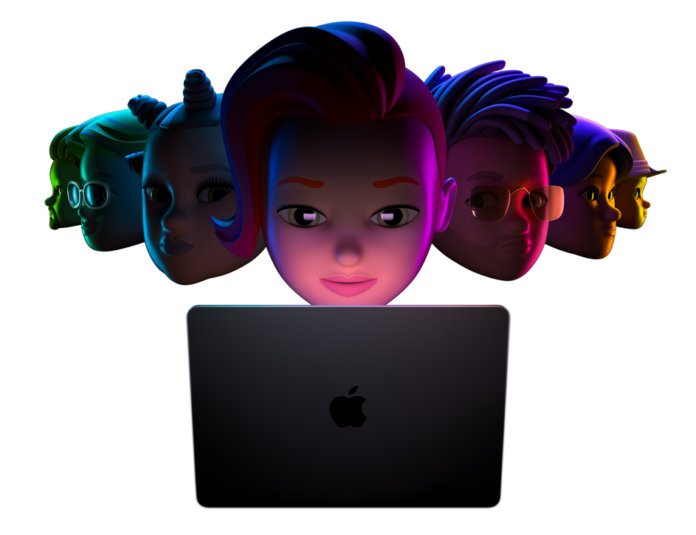 Apple is holding its annual worldwide developer conference and kicked it off with a keynote complete with special effects and pomp a couple of days ago talking about new Apple Silicon (the M2), new Macs (the Air and the entry level Pro) and their upcoming releases of MacOS (Ventura), WatchOS (9), iPadOS and iOS (or should it be called iPhoneOS?). What follows is a recap with feature highlights along with a few of the popular YouTuber’s impressions.

So let’s get into it. First, let’s talk about the M2 Chip. While I’m not a CPU nerd, there is a baseline of comparing M1 to M2. Both use 5nm production though the M2 is built with a “second generation 5nm technology”. Apple stated it is focused on creating “Power Efficient Performance” with the design and development of the M2. In order to do that, they increased the number of transistors to 20 billion (25% more than M1) to enhance performance of every aspect of the chip starting with the memory controller that delivers 50% more memory bandwidth at 100GB/sec and the chip can now support up to 24GB of unified memory (50% more than M1). The M2 also supports 4 efficiency cores and 4 high performance cores. On the GPU side, they increased the number of cores to 10 from 8. All this translates to 18% more CPU performance along with 35% more GPU performance over the M1 (which already had impressive performance). Compared with non-Apple chips, the M2 gives you almost 90% of the CPU performance at ¼ of the power, translating to a much cooler, less noisy, higher battery life experience.

While these chip announcements are great, you need some place to put them in. Apple announced a brand new MacBook Air sporting the new M2 silicon in a completely redesigned enclosure sporting a 13.6” 500 nits liquid retina ProRes display with the now familiar notch (found on the new gen MacBook Pros), the Magic Keyboard, Touch ID built in, Function keys (instead of a touch bar), 2 Thunderbolt 4 ports, a high-impedance headphone jack, up to 24GB of unified RAM with up to 2TB of SSD storage, 4 speakers, immersive audio and MagSafe all available in 4 different colours (I like the midnight one) with a fanless design. Prices start at $1,199 USD or $1,499 Canadian dollars.

Flanking the M2 MacBook Air, Apple also announced an M2 version of the entry level MacBook Pro which uses the same old form factor as before along with the dreaded touch bar with integrated TouchID. The main difference is the screen (not liquid retina), no MagSafe, no notch but with an active cooling system to keep the processor humming under heavy load for a starting price of $1,299 USD or $1,699 Canadian dollars.

Personalization – Lock screens can now be customized with photos and widgets. Widgets can be developed by 3rd parties. Lock screens can be selected much like you select watch faces on Apple Watch. Live Activities allow live events to be dynamically updated like fitness app, sports, etc. Apple created an api to allow 3rd party developers to create Live Activity widgets.

Focus is enhanced with focus filters allowing only certain notifications to come through and that can be customized by app as well.

Messages can now be edited, send can be undone and unread. “Shared With You” is a new feature that will notice the kinds of photos, music, and other things that have been shared with you in the past and will allow you to look at them in the related apps in that context.

SharePlay lets you share in real time, have watch parties, listening to music or working out.

Dictation has been improved allowing you to seamlessly switch between typing and talking or any combination thereof. Dictation now happens entirely on device meaning none of your voice data leaves your phone. Live Text and Live Text Camera View lets you view, select and translate text right in your camera! Text can also be pulled from videos which means you can pause and live select text straight from the video (wow).

Apple Wallet enhancements will include ID verification, Transit passes and even hotel room key access is now available. You can also share your key with other people via messages or mail and the recipients can add it to their wallet. Maybe the biggest thing is being able to receive money via Apple Pay as a merchant. Apple also announced ‘Apple Pay Later’, a service that will allow you to stretch payments over a longer period of time.

Apple Maps now supports multi-stop routing allowing you to carve the most efficient route to your many destinations. They’ve created enhanced city views for select cities where it will highlight buildings, where the entry way is, and provide architectural details as well.

Family Sharing adds parental controls to manage screen time, approve purchases, what content can be consumed and even setting up devices for them. Apple subscriptions can also be shared with up to 5 family members at no extra cost.

Photos now have shared albums where multiple people can share and contribute to photo albums either by selecting them or telling your camera app to upload directly to them.

Apple Home Kit will be morphing into a new platform called ‘matter’ which is a new industry standard based on Home Kit. Matter is being adopted by many industry leaders including Google and Amazon.

Apple CarPlay is being taken to the next level with CarPlay enabled vehicles letting CarPlay take over all indicators including speedometers, map displays and other gauges and indicators

WatchOS 9 is coming out with enhancements to workouts, health, sleep, device connectivity and more. For health, there’s a medications app that will track and remind you to take medications, there’s a sleep monitor to help you gain insight into how you sleep, new watch faces, and more connectivity across all Apple devices.

This is a big one. MacOS Ventura brings some of the same enhancements found on new iOS for working and collaboration but adds a new feature called ‘Stage Manager’ which groups your apps in clusters on the left of your screen allowing you to switch between them with ease. Spotlight has been reworked to provide quicker and more intuitive results across your system and the internet. This enhanced version of Spotlight has been made available across all Apple devices and platforms.

Apple Mail is enhanced with what can best be described as boomerang (on the Google platform) for Apple Mail allowing you to get reminders to follow up on mail, reply at a specific time or have messages come to the top of your inbox at a later time. They’ve also enhanced search on Apple Mail promising faster and more relevant results.

Apple claims that the latest version of Safari in MacOS Ventura is the world’s fastest, most private and most power efficient browser.

On the security front PassKeys is a new way of creating and storing passwords and can be shared across all Apple Devices. A Passkey uses advanced cryptography and the biometrics of your device to keep your passwords safe.

Other things of note: switching between devices will be even more seamless allowing you to go from your phone to your mac with more ease. You can even use your iPhone as a high quality web cam on your Mac even with multi-camera operation, Center Stage and more. 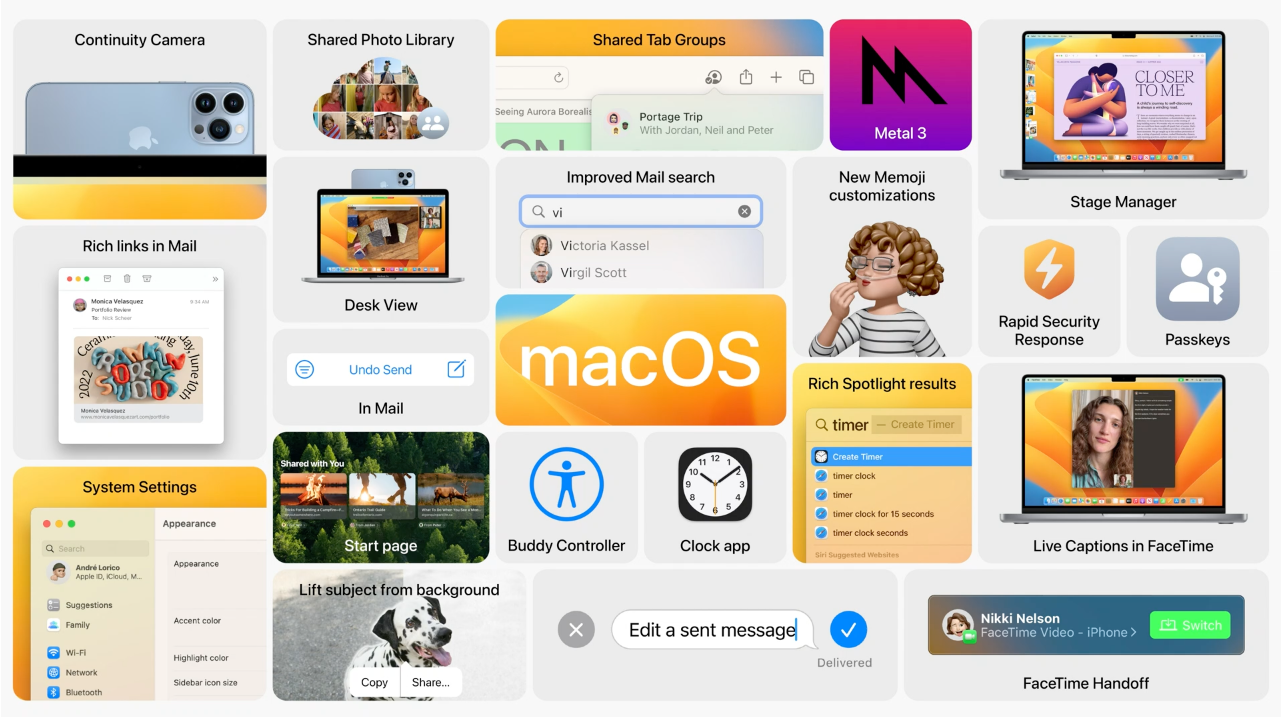 iPadOS brings many of the features announced on MacOS including live real time collaboration where you can share your documents in real time with a team where each can directly work on the same document (kind of how Google has done with their apps), shared Safari tabs where you can all see the same tab groups and this new app called ‘Free Form’ which is kind of like a huge white board where everyone can contribute. Stage Manager is also coming to iPadOS where you can easily switch between open apps as is extending the screen with full resolution on external displays (though you will need to use some kind of pointing device and keyboard on the external screens to manipulate the content). Metal 3 is also coming to iPadOS for a better gaming experience.

What people are saying about Apple’s latest announcements

Marques Brownlee who has covered Apple extensively in the past had this to say: