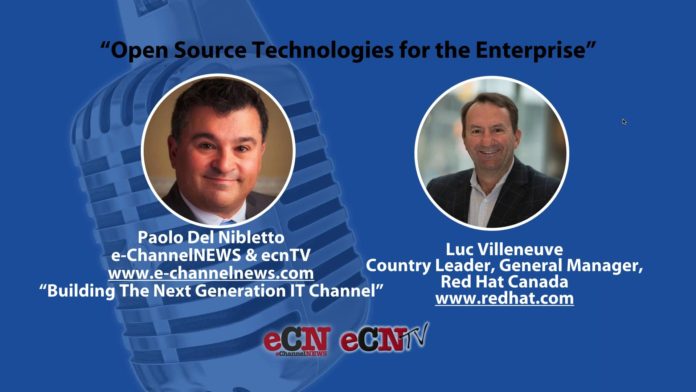 Over the course of his career in high tech, Luc Villeneuve the GM of Canada for Red Hat has worked to provide win-win scenarios for his company and his partners.

After the recently concluded Red Hat Summit conference in San Francisco, the open source pioneer has armed Villeneuve with more win-win offerings after the company declared the future of technology will be open and hybrid cloud.

The strategy behind the bold announcement is the belief that open source can innovate and improve the modern hybrid ecosystem of the cloud through the channel community.

In the EChannelNews podcast, Villeneuve discussed how Red Hat senior leader Paul Cormier has been evangelizing the hybrid cloud to customers in the past three-years. This strategy, according to Villeneuve, offers customers choice to be on premise or spin off workloads to clouds of their choice.

“Early on they were in a locked-in position, but we showed in the last three-years how hybrid cloud can maximize the opportunity to reduce cost and bring agility to organizations,” Villeneuve said.

As for the win-win offerings from Red Hat, they will be coming in the form of alliance partnerships with IBM and Microsoft. Now, Red Hat has had long standing business relationships with these two industry giants. But Villeneuve told EChannelNews that the company is taking these two partnerships to the next level.

“With IBM, a few years ago they put a lot of money into the open source world for the first time, and I think they put in a billion dollars into the community. As they went along they realized they were missing a few pieces and we had a good offering for them,” he said.

The market advantage now for Red Hat Canada partners is that IBM has a very large market coverage especially in the enterprise. This is what Villeneuve calls the win-win as the channel can now go in and offer solutions they don’t have such as DevOps.

One of the more significant solutions coming out of the Red Hat Summit is OpenShift. At the Summit conference, Red Hat announced it was furthering its partnership with Microsoft with a joint development to bring out the first OpenShift managed service on a public cloud.

Villeneuve brought 25 Canadian channel partners to the Summit event to explore this new market opportunity. “We noticed that several business partners are living in both worlds with Linux and Microsoft and now with the opportunity to bring more workloads to Azure with MySQL running on Linux will help to further the agility of customers,” he added.

Again, similar to the IBM arrangement, Microsoft expands the market coverage for Red Hat and its partner network leading to another win-win.