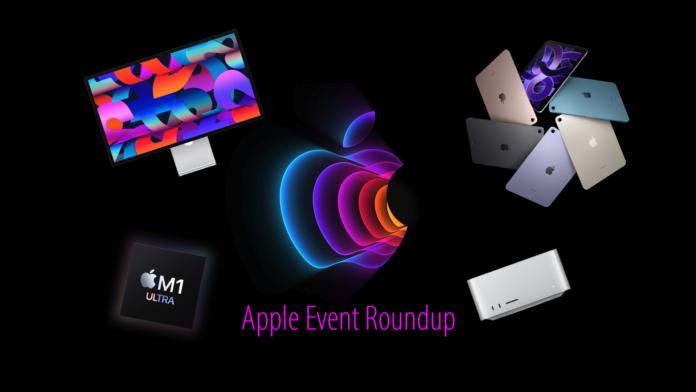 My overall impression of this Apple event from a production standpoint is that it was very heavy on unnecessary use of intro videos for every little thing… Like do you really need a 15 second multi-media, graphic intensive high tech announcement for a new colour iPhone 13?

I found the intros the most annoying part of the presentation taking up unnecessary time and placing undue emphasis on seemingly small announcements. The first 25 minutes of the presentation were yawn and ho hum until you got into the meat of it… the announcement of the new M1 Ultra chip which is basically 2 M1 Max chips fused together. It has me thinking… how many more terms can they use to define a chip’s performance.. first we have the M1, then the M1 Pro, the M1 Max… and just when you thought nothing could be bigger than a Max, there’s the Ultra… Next, we’ll se the M1 Stupendous or the M1 Super or the M1 Galaxy… I’m being facetious of course but maybe the Marketing department needs to turn it down a notch.

Now that you have a chip, you need something to put it in… Along with this new SOC announcement, apple also announced a computer that will house such a beast. The Mac Studio computer, which is expandable to 8TB of storage, a whopping 128GB of unified memory 64 graphic cores, 20 CPU High Performance cores, 4 high efficiency cores and much more in a package that looks like a fat Mac Mini. Before I get ahead of myself, here’s a summary of what was announced and a selection of first impressions by Youtubers who I think give honest reviews of technology in general including Apple technology.

The first six things are mostly housekeeping and moderate updates to existing products. The new studio monitor is a bit of a yawn in that LG has had nearly the same specs for less money for over 5 years. The big news is the new Mac Studio computer. Below is a summary of some of the reactions of industry experts.

First up, I’ll start with Snazzy Labs. Here’s what he had to say:

Here’s his take on the new M1 Ultra chip

Marques Brownlee has also been prominent in reviewing the latest Apple tech had this to say:

Finally, Linustech says that Apple makes their brain hurt, finding some of their claims dubious. Check out his impressions:

As the year comes to a close, I’d like to thank everyone who has followed and participated in our journey

Forecast for the Channel in 2023